The Little Red Wagon is the emblem of America’s Promise and the symbolic manifestation of the challenge to give every child the opportunity to dream and the tools to achieve.

Every ten seconds a child is reported abused or neglected. 1 in 4 children in America lives in poverty. 1 in 7 has no health insurance. 1 in 8 is born to a teenage mother. 1 in 8 never finishes high school. 1 in 9 between the ages 12-15 is the victim of a crime. General Colin Powell challenged his team to find a way to address these sobering statistics. We knew we had to be bold. General Powell offered tremendous awareness potential in and of himself, and we needed to build a brand that capitalized on his experience and respect without tarnishing either. 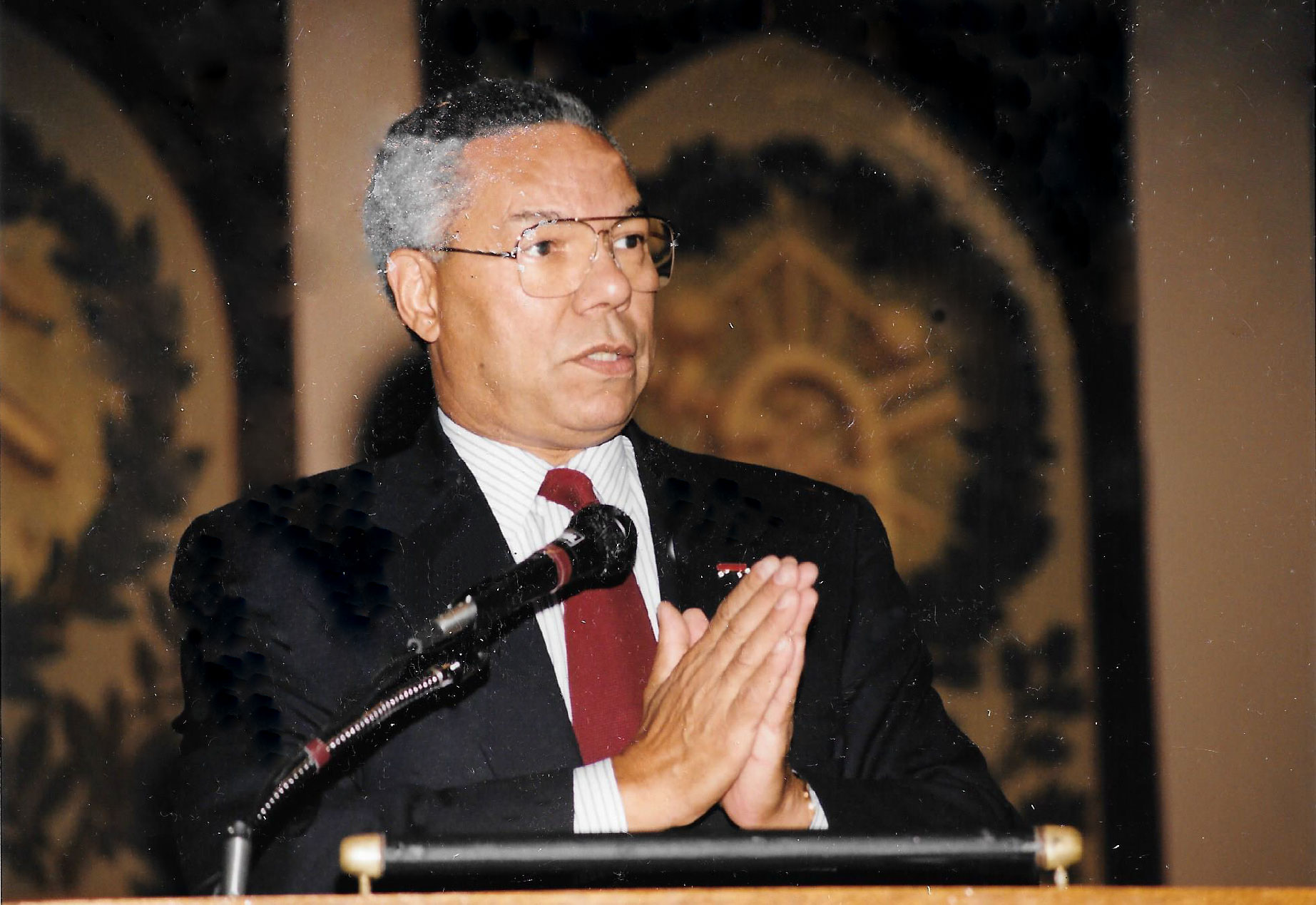 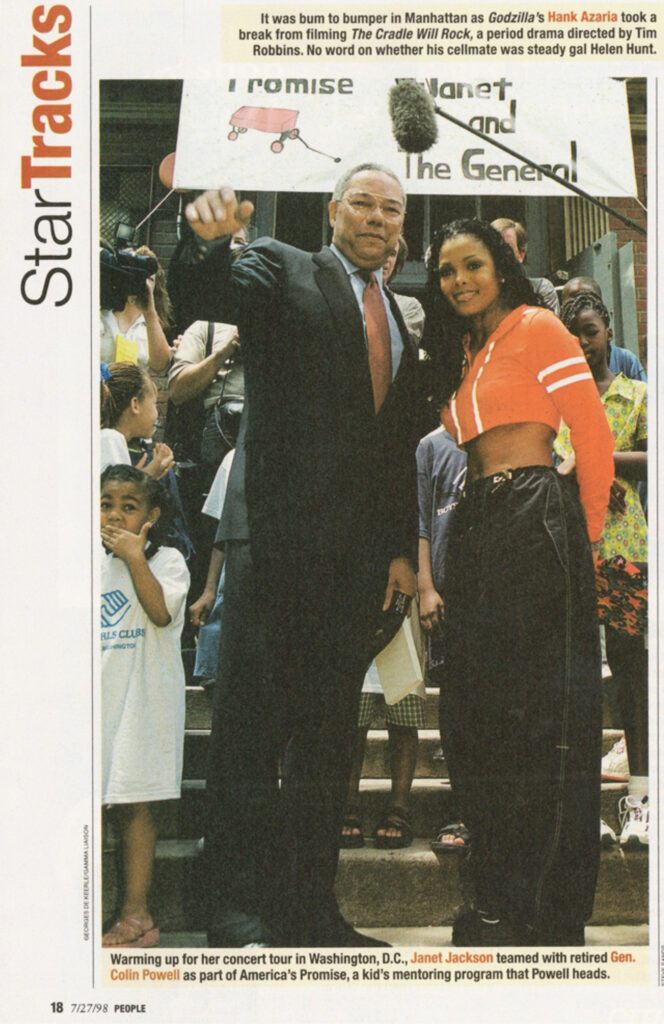 A national call to action. Working directly with General Colin Powell, Tim Hanlon gave the brand its name and served as Co-Director of Communications for the Presidents’ Summit for America’s Future in Philadelphia. It was the first time in our nation’s history that all living presidents came to together around a single issue. It was here, the birthplace of the Federal Government, where Presidents Ford, Carter, Bush, Clinton and Mrs. Reagan signed a “Declaration of Commitment” for our country’s at-risk youth. And it was here where General Powell agreed to launch America’s Promise, a bold large-scale movement to promote action at every socio-economic level. Following the Summit, Tim managed a nationwide effort that touched down in hundreds of communities during a two-year period. The multifaceted campaign helped educate and enlist support from key audiences, including local governments, national non-profits and leading corporations around the country. 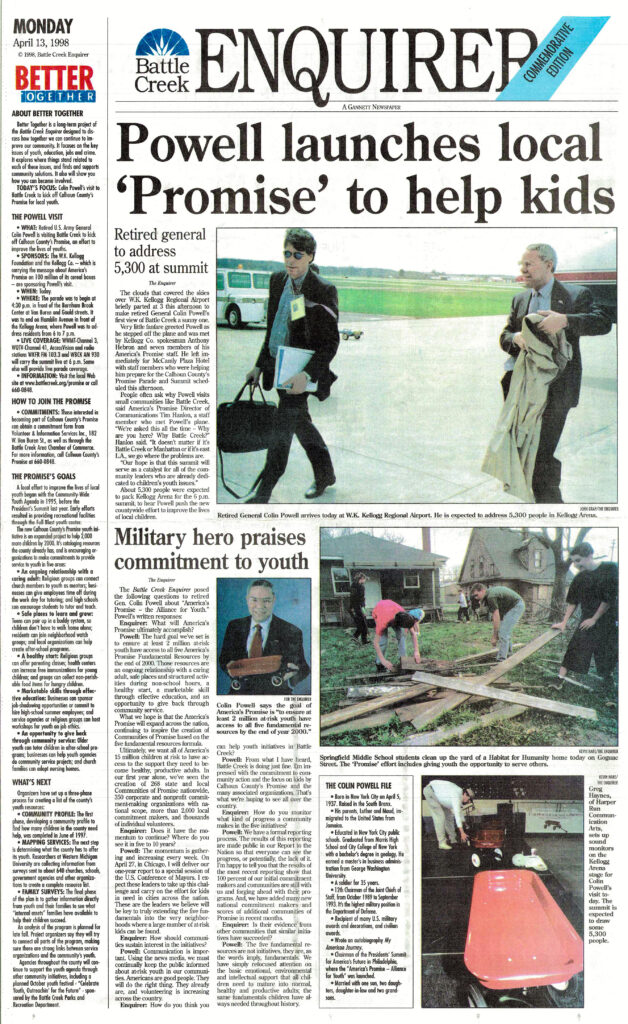 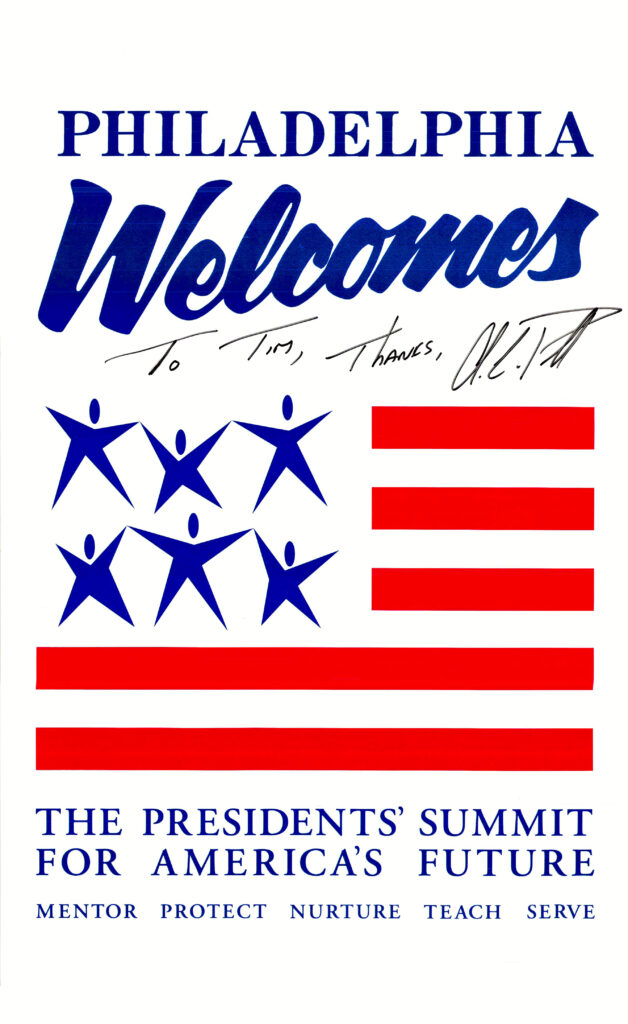 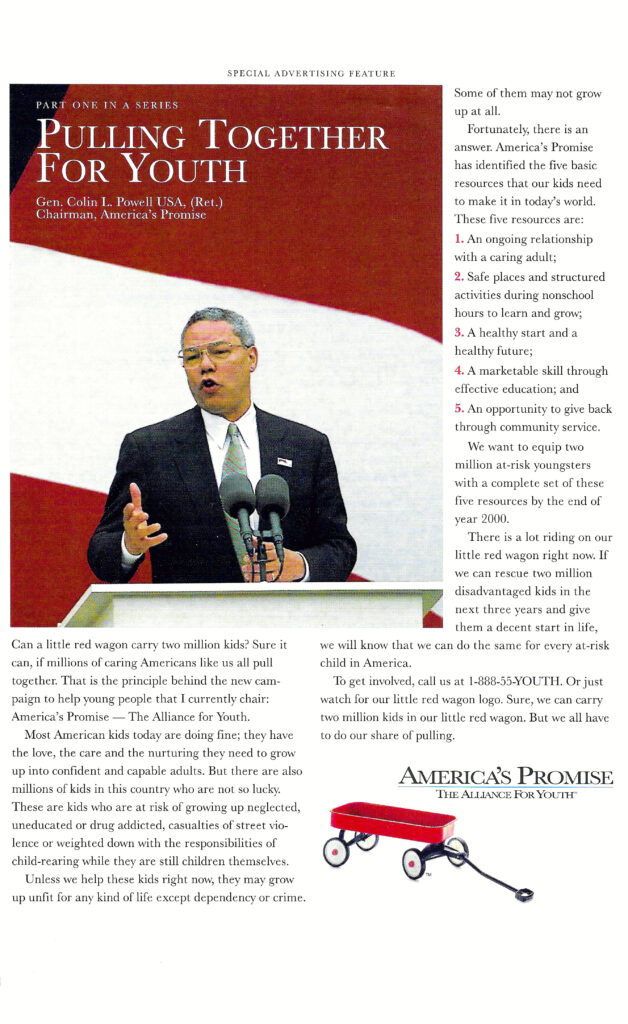 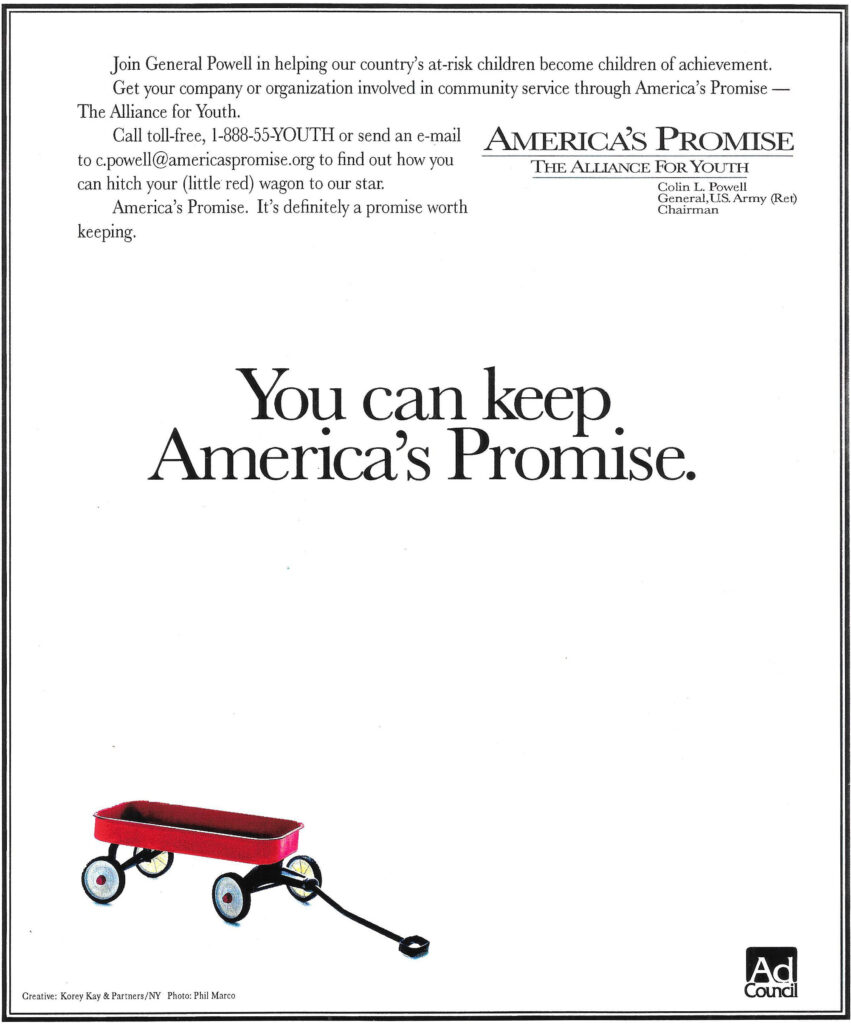 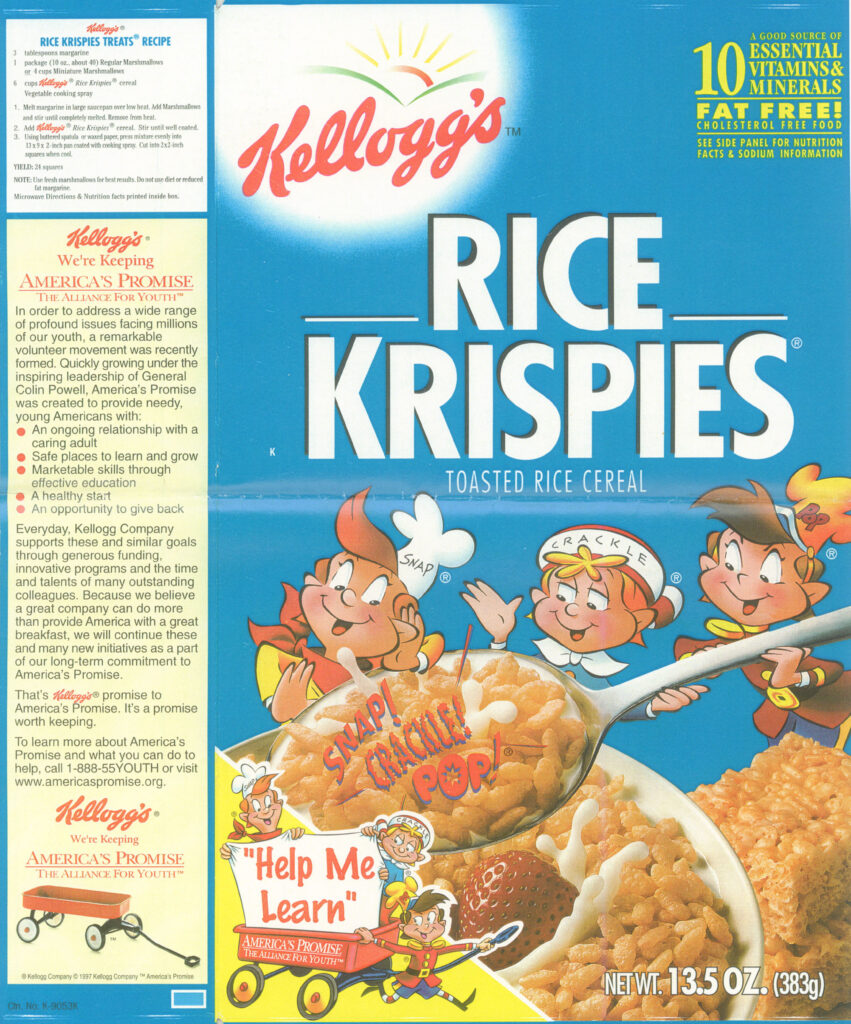 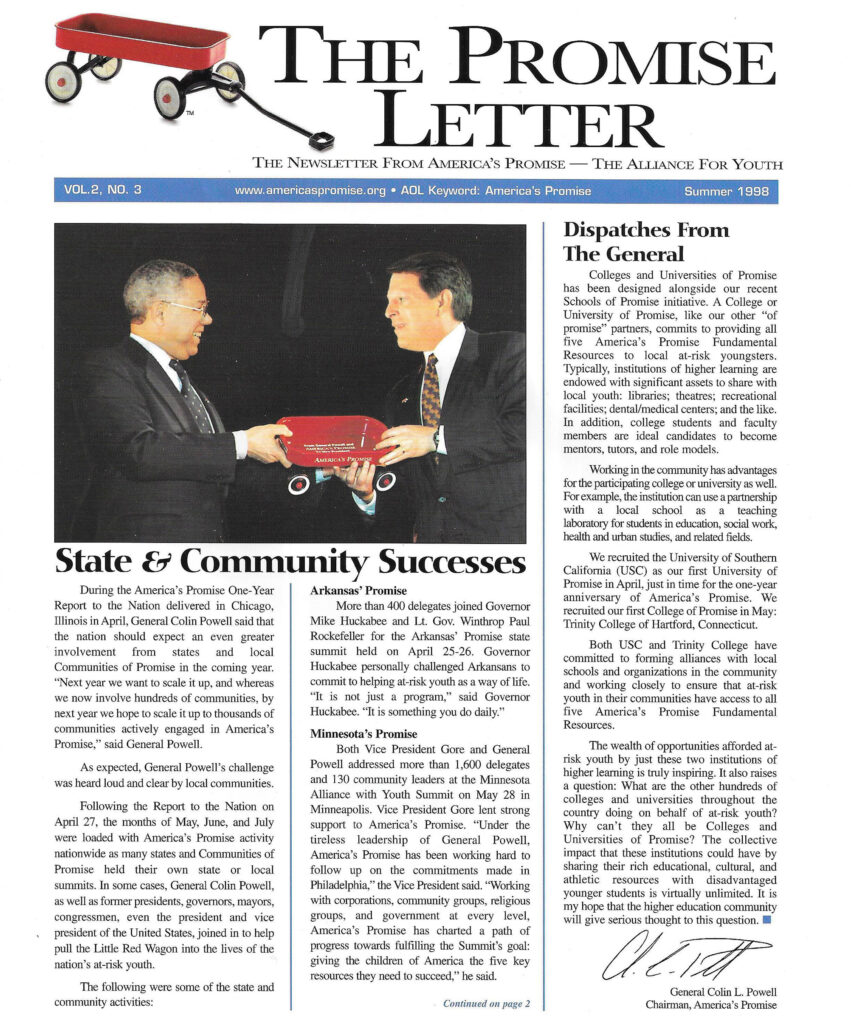 Since its founding America’s Promise has grown to become the nation’s largest multi-sector alliance focused on the well-being of at-risk youth.  Starting with a short list of partners, today America’s Promise encompasses more than 400 partner organizations representing business, nonprofits, communities and policymakers.